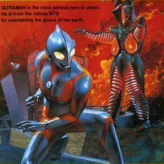 The Gudis virus has come to Earth, resulting in giant mutant monsters! Take control of Ultraman and fight against all the enemies in fighting video game! Stop the Gudis and save mankind from extinction!

Ultraman, also known as Ultraman: Towards the Future, is a 2D fighting multi-platform video game that is based on the contemporary series of the same name. Released back in 1991 for the SEGA Genesis gaming console, the game focuses on Ultraman as he fights an intergalactic battle against Gudis. The game features a very high difficulty, making it extremely challenging to casual players. Will you be able to beat up all the monsters and stop the Gudis from annihilating all life on Earth? Good luck and have fun!

There have been 11 likes from 15 votes on this game.

Play Ultraman game online in your browser free of charge on Arcade Spot. Ultraman is a high quality game that works in all major modern web browsers. This online game is part of the Arcade, Action, Emulator, and SEGA gaming categories. Ultraman has 11 likes from 15 user ratings. If you enjoy this game then also play games Ultraman VS Alien Zombies and Ultraman - Towards the Future. Arcade Spot brings you the best games without downloading and a fun gaming experience on your computers, mobile phones, and tablets. New arcade games and the most popular free online games are added every day to the site.