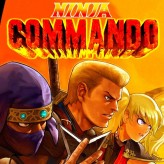 Team up with Ninja Commandos from around the world and stop the villain Spider and the Mars Corporation. Travel through different periods of time and defeat the enemies and stop their evil plot to conquer the world! Pick a character and use its unique combat style to over power all of your opponents.

Ninja Commando is a top down vertical scrolling action game that was first released for the Neo Geo arcade system back in 1992. The gameplay is similar to the run-and-gun classic game Ikari Warriors. In this game, the player takes control of one of the three ninja warriors. Each warrior has their own unique abilities and fighting style. In this game, an enemy under the name of Spider managed to get a hold of a working time machine. Bent in conquering the world, he uses the time machine to go back on the past and change history. Your goal is to stop him and his corporation.

The game’s language is Japanese

Play Ninja Commando game online in your browser free of charge on Arcade Spot. Ninja Commando is a high quality game that works in all major modern web browsers. This online game is part of the Adventure, Arcade, Emulator, and Neo Geo gaming categories. Ninja Commando has 2 likes from 2 user ratings. If you enjoy this game then also play games Pokemon Greninja-Z and LEGO Ninjago The Final Battle. Arcade Spot brings you the best games without downloading and a fun gaming experience on your computers, mobile phones, and tablets. New arcade games and the most popular free online games are added every day to the site.