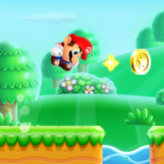 Run Mario, Run! Grab all the coins and avoid all the hazards as you run as fast as you can as the plumber hero, Mario in Super Mario Run! Avoid the flames that engulf everything by running away!

Super Mario Run, also known as Super Mario Rush, is an HTML5 game based on the Super Mario franchise. Unlike the traditional Mario games, Super Mario Run is a running video game set in the Mushroom Kingdom. The goal of the game is to have Mario run as fast as he can and reach as far as he could while trying to avoid the flames! Use the coins collected to buy various costumes and characters and try to set a new world record in this fun game! Good luck and have fun!

This game can also be played on mobile devices: Android and iOS.

Play Super Mario Run game online in your browser free of charge on Arcade Spot. Super Mario Run is a high quality game that works in all major modern web browsers. This online game is part of the Arcade, Running, HTML5, and Mario gaming categories. Super Mario Run has 4 likes from 6 user ratings. If you enjoy this game then also play games Super Mario Bros. and Super Mario 64. Arcade Spot brings you the best games without downloading and a fun gaming experience on your computers, mobile phones, and tablets. New arcade games and the most popular free online games are added every day to the site.