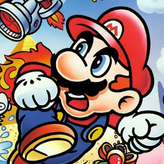 Princess Daisy of Sarasaland has been kidnapped by the evil alien Tatanga! Play as Mario and rescue the princess in this classic platformer game – Super Mario Land! Journey to the new land and travel to the Chai Kingdom where the Princess is being held captive! Jump over enemies to defeat them and complete all levels!

Super Mario Land is the first Mario adventure game released for the Game Boy handheld console (GB). Unlike the games before it, Super Mario Land did not take place in the Mushroom Kingdom, but in a new land called Sarasaland. In this game, an alien named Tatanga hypnotized the people of the land and wanted to marry the beautiful Princess Daisy. Journey with Mario to a land of giant crabs, Koopa Troopas, flying stone heads and hungry sharks and have fun saving a different Princess!

There have been 38 likes from 43 votes on this game.

Play Super Mario Land game online in your browser free of charge on Arcade Spot. Super Mario Land is a high quality game that works in all major modern web browsers. This online game is part of the Retro, Platform, GB, and Mario gaming categories. Super Mario Land has 38 likes from 43 user ratings. If you enjoy this game then also play games Super Mario Bros. and Super Mario 64. Arcade Spot brings you the best games without downloading and a fun gaming experience on your computers, mobile phones, and tablets. New arcade games and the most popular free online games are added every day to the site.