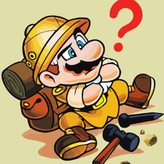 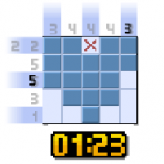 When Mario isn’t saving the Princess, his out doing some archaeologist work! Help Mario chisel away on “Paint by Numbers” logic puzzles in Mario’s Picross!

Mario’s Picross is the very first game in a series of Mario themed Picross titles released in the 1990s. The game is a collection of nonogram logic puzzles involving grids with numbers. In this game, Mario is an archaeologist and his goal is to chisel and solve the logic puzzles to reveal the hidden pictures and images. There a wide variety of pictures, and includes a few Mario-related characters, food, animals, objects, and more. Complete the puzzle with the time given and avoid making mistakes or it will cost you some time! Have fun!\

Play Mario's Picross game online in your browser free of charge on Arcade Spot. Mario's Picross is a high quality game that works in all major modern web browsers. This online game is part of the Arcade, Puzzle, GB, and Mario gaming categories. If you enjoy this game then also play games Mario's Time Machine and Mario's Tennis. Arcade Spot brings you the best games without downloading and a fun gaming experience on your computers, mobile phones, and tablets. New arcade games and the most popular free online games are added every day to the site.