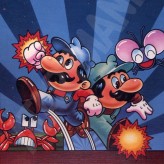 Mario Bros. is a platform game developed by Nintendo in 1983. Exterminate creatures coming from sewers and flip them on their backs. Kick them away to move on to the next level.

Investigate the grimy underground of New York as you are called to remove the infestation growing on there. Each phase of the game has one goal, run, and avoid the monsters. Once they are on their backs, show them the boot to proceed to other levels. Each corner of the screen has a green pipe where the enemies come out and a POW box in the center. Gain points by defeating multiple enemies and join the bonus round for more points. Once the Shellcreepers are beneath you, this is the time for foot stomping action. But spend too much time not swiping them with your feet, and they will bounce back stronger and faster. Each level has a certain number for you to defeat, so strategize well. Levels come with different challenges and four enemy types. Aside from the Shellcreeper, the Sidestepper would require two hits to flip, the Fighter Fly, flying across and can only be flip when it lands, and the Slipice, which turns everything slippery. Once you flip the Slipice no need to kick as it disappears right away. If everything gets hard, use the POW box to flip them. However, the Slipice can only be used three times, so use it wisely. Now get stomping!

There have been 5 likes from 8 votes on this game.

Play Mario Bros. game online in your browser free of charge on Arcade Spot. Mario Bros. is a high quality game that works in all major modern web browsers. This online game is part of the Arcade, Retro, Mario, and Atari 2600 gaming categories. Mario Bros. has 5 likes from 8 user ratings. If you enjoy this game then also play games Super Mario Bros. and Super Mario 64. Arcade Spot brings you the best games without downloading and a fun gaming experience on your computers, mobile phones, and tablets. New arcade games and the most popular free online games are added every day to the site.