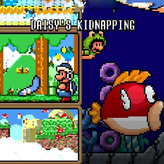 Daisy has been kidnapped by Bowser and he even took away all the power stars! Go on an adventure to rescue the princess in Super Mario: Daisy’s Kidnapping!

Super Mario: Daisy’s Kidnapping is a ROM hack of the Super Nintendo Entertainment System (SNES) game Super Mario World. This hack is based mostly around the improvements on graphics, bringing the art and graphics of Super Mario All-Stars to the original SMW.  The game also features lots of new tilesets and custom graphics, successfully implemented the abilities of the modern Mario games, a load of specifically coded sprites, and so much more.