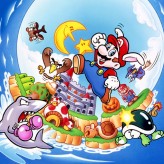 Wario took over Marioland and turned it into his own! Play as Mario and turn Warioland back to being Marioland in Super Mario Land 2 – 6 Golden Coins! Defeat various creatures and get different power-ups to rescue the entire land!

Super Mario Land 2 – 6 Golden Coins is a classic action platformer game for the Game Boy handheld system (GB) released back in 1992. The game features similar gameplay to Super Mario World with new power-ups in play. In this game, Wario swept the entire land and turned it into his own while Mario was away. Mario must now undo Wario’s spell by collecting the 6 magical golden coins that will turn the land back to the way it was before Wario came along. Search for the golden coins on the new worlds and complete all 6 zones.

There have been 51 likes from 55 votes on this game.