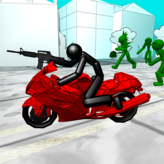 Grab your stick figure and drag it across the screen to defeat the enemy in this unique ragdoll fighting game where you don't have much control - Stickman Warriors: Fatality! Are you ready for some brutal and unrestrained stickman fights?

Stickman Warriors: Fatality is a 2D physics-based ragdoll fighting game where your goal is to drag around a stickman in hopes of defeating your opponent. Released back in June 2019, this game is basically Mortal Kombat in stick universe with crazy physics and brutal deaths.

The game's control is pretty straightforward. All you need to do is drag your stickman around inside the arena to avoid the various traps and dangerous objects while trying to kill your enemy. Hitting the enemy in the head will deal greater damage than hitting the body or the limbs. Likewise, you will also need to protect your stickman's head from enemy attacks.

The game features a total of 4 different weapons to unlock and fifteen enemies to defeat in brutal combat. Each weapon will increase your weapon reach and damage, and unlocking the final weapon will help you deal with some of the trickiest opponents. Do you have what it takes to defeat every single opponent and be the stickman warrior champion?