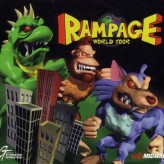 Destroy some tall buildings, throw around some cars, and eat the people in panic in this simple yet highly addicting game – Rampage: World Tour! Take control of a rampaging giant monster and destroy every city around the world!

Rampage: World Tour is a destructive action video game released for the Nintendo 64 gaming system back in 1998. The game features simple gameplay in which you are a rampaging monster whose only goal is to destroy every city it came across with. Rampage: World Tour is the second entry in the series and features many identical mechanics and elements to the first game, but is overall more fun and enjoyable. Avoid or destroy the military forces that are out to get you and continue on your never-ending rampage!

There have been 47 likes from 48 votes on this game.