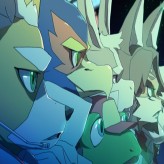 Join Star Fox and his team once again to defeat the evil Emperor Andross and his galactic army in this arcade shooter game – Star Fox 2! Move a team of two ships freely around the map and explore the Lylat system!

Star Fox 2 is an action shooter arcade game intended for release back in 1995 for the Super Nintendo Entertainment System (SNES), but was cancelled before it was released. The game continues the battle against Emperor Andross who seeks the power to conquer the Lylat system. The game introduces a gameplay system that is played in semi-real time. The game also features new ship types, new members, and a much needed freedom to move around the map. The game was canceled due to the impending release of the Nintendo 64 at that the time, and the company’s desire to use the new engine.

Play Star Fox 2 game online in your browser free of charge on Arcade Spot. Star Fox 2 is a high quality game that works in all major modern web browsers. This online game is part of the Arcade, Shooting, Emulator, and SNES gaming categories. Star Fox 2 has 5 likes from 5 user ratings. If you enjoy this game then also play games Super Mario All-Stars and Mario and Luigi: Superstar Saga. Arcade Spot brings you the best games without downloading and a fun gaming experience on your computers, mobile phones, and tablets. New arcade games and the most popular free online games are added every day to the site.