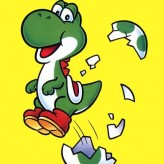 Follow the plumber brothers Mario and Luigi as they try to help the cute dinosaur Yoshi in this retro puzzle game. Match and group together similar monsters to remove them from the play! Have fun playing a Mario-themed falling block game!

Yoshi (also known as Yoshi’s Egg) is a puzzle video game released back in 1991 for the Nintendo Entertainment System (NES). In this game, the player is tasked in clearing the monsters from the playing field. Monsters will fall from the top of the screen to build vertical stacks. The goal of the game is to prevent the stack from growing too high. The gameplay is almost similar to Tetris games. Keep an eye out for the two halves of Yoshi’s egg!

There have been 29 likes from 35 votes on this game.

Play Yoshi game online in your browser free of charge on Arcade Spot. Yoshi is a high quality game that works in all major modern web browsers. This online game is part of the Arcade, Puzzle, NES, and Mario gaming categories. Yoshi has 29 likes from 35 user ratings. If you enjoy this game then also play games Yoshi's Island: Super Mario Advance 3 and Super Mario World 2 - Yoshi's Island. Arcade Spot brings you the best games without downloading and a fun gaming experience on your computers, mobile phones, and tablets. New arcade games and the most popular free online games are added every day to the site.