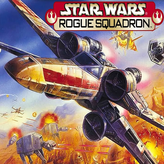 Join the galactic fights between factions and step into the events in the films Star Wars and The Empire Strikes Back in this wonderful action-packed shooting game for the Nintendo 64 – Star Wars: Rogue Squadron!

Star Wars: Rogue Squadron is a 1998 action shooter video game that was released for the Nintendo 64 gaming system. The game is set in the fictional Star Wars galaxy and is heavily inspired by the comic called Star Wars: X-wing Rogue Squadron. The game is unlike the similarly titled Star Wars: X-Wing game series, in that, it does not focus on space combat simulation, and instead, has fast-paced arcade-style shooting gameplay. Will you be able to complete the missions on all sixteen levels? Good luck and have fun!