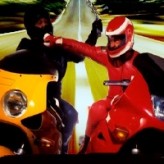 Thrash and bash your way through the finish line in this violent motorcycle racing arcade game for the SEGA Genesis – Road Rash II! Select a racer and race across a variety of tracks and hit your opponents off their bikes. Remember, it’s not enough to win, others must suffer the pain of defeat!

Road Rash II is the second title in the motorcycle racing video game developed by EA games back in 1993 for the Sega Genesis drive. The game introduced many new mechanics and elements to the series including Nitro boosts, and a variety of weapons. The game is pretty realistic in a sense that it doesn’t have super powered weapons or advance weapon integration. You can get batons, chains, bats, and you can punch or kick the other racers until they will fall off their bikes. Have fun.

Play Road Rash II game online in your browser free of charge on Arcade Spot. Road Rash II is a high quality game that works in all major modern web browsers. This online game is part of the Racing, Arcade, Emulator, and SEGA gaming categories. Road Rash II has 2 likes from 2 user ratings. If you enjoy this game then also play games Road Rash and Smashy Road Online. Arcade Spot brings you the best games without downloading and a fun gaming experience on your computers, mobile phones, and tablets. New arcade games and the most popular free online games are added every day to the site.