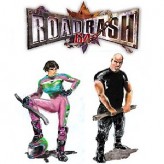 Rev up your engines and ready your weapons in this exhilarating and deadly motorcycle racing game that will keep you at the edge of your seat – Road Rash 64! Grab that baseball bat and load that pepper spray and try to piss someone off!

Road Rash 64 is a fun vehicular combat game released for the Nintendo 64 gaming system back in 1999 and is one popular entry to the Road Rash franchise. The game features a unique blend of combat and street racing with cool punk-ass motorcycles. Road Rash 64 is the fifth installment of the series and features the same gameplay as with its preceding game but with much better graphics and content. Punch, kick, or use a weapon to beat down your competitors and win the race.

Play Road Rash 64 game online in your browser free of charge on Arcade Spot. Road Rash 64 is a high quality game that works in all major modern web browsers. This online game is part of the Racing, Arcade, Emulator, and N64 gaming categories. Road Rash 64 has 2 likes from 2 user ratings. If you enjoy this game then also play games Road Rash and Smashy Road Online. Arcade Spot brings you the best games without downloading and a fun gaming experience on your computers, mobile phones, and tablets. New arcade games and the most popular free online games are added every day to the site.