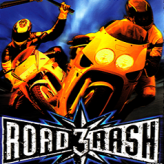 Rev up your engines and grab your weapon as you go on a wild road rage in this awesome video game for the Sega Genesis Drive – Road Rash 3! Race all over the world and beat down all your competitors to secure your victory!

Road Rash 3 is the third installment of the popular motorbike racing series. Released back in 1995, the game features tracks from all over the world including the United Kingdom, Japan, Kenya, Germany, and Aussie Outback. The game is the first of the series to feature digitized characters and other sprites. The game features five new weapons including the cattle-prod! The game also features new game modes such as the new weapons and bike enhancer modes, and so much more. Have fun!

Play Road Rash 3 game online in your browser free of charge on Arcade Spot. Road Rash 3 is a high quality game that works in all major modern web browsers. This online game is part of the Racing, Arcade, Emulator, and SEGA gaming categories. Road Rash 3 has 1 likes from 1 user ratings. If you enjoy this game then also play games Road Rash and Smashy Road Online. Arcade Spot brings you the best games without downloading and a fun gaming experience on your computers, mobile phones, and tablets. New arcade games and the most popular free online games are added every day to the site.