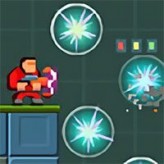 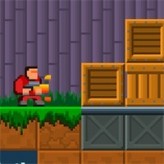 Use the power of science and find your way back in this physics platformer game! Use your absorption cannon to move objects in Absorbed! Move blocks, solve puzzles, and defeat enemies to find your way back home and escape the odd world.

In Absorbed, you’re a science man whose job is to test inventions and other geeky stuff that the scientist make. One particular experiment is the Absorption gun that can absorb one object regardless of what it is, and throw it forward. Unfortunately the experiment went wrong and you were sucked inside a black hole and got transported to a different world. Find your way back by solving puzzles and defeating enemies along the way. Every time you die, you will lose 1 star that acts as your rank per level having 3-star rank as the maximum.

Play Absorbed game online in your browser free of charge on Arcade Spot. Absorbed is a high quality game that works in all major modern web browsers. This online game is part of the Puzzle, Action, Physics, and Challenge gaming categories. Absorbed has 1 likes from 1 user ratings. If you enjoy this game then also play games Absorbed 2 and Five Nights at Freddy's 2. Arcade Spot brings you the best games without downloading and a fun gaming experience on your computers, mobile phones, and tablets. New arcade games and the most popular free online games are added every day to the site.