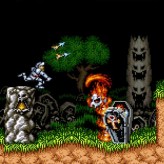 The Princess has been kidnapped to be interrogated for the whereabouts of an ancient item! Play the role of Knight Arthur once again and fight hordes of undead to rescue the Princess and save the land in Super Ghouls’n Ghosts!

Super Ghouls ‘n Ghosts (originally released in Japan as Chōmakaimura) is a side scrolling action game and is the third entry of the series. Released back in 1991 for the Super Nintendo Entertainment System (SNES), the game takes the player to the rule of Knight Arthur once again. The game features enhanced graphics, gameplay, and introduces new mechanics. In this game, Knight Arthur’s armor can be upgraded up to three times. For each upgrade, the armor value increases as well as adding some few nice effects, like increased damage, to the protagonist.

Play Super Ghouls'n Ghosts game online in your browser free of charge on Arcade Spot. Super Ghouls'n Ghosts is a high quality game that works in all major modern web browsers. This online game is part of the Arcade, Action, Emulator, and SNES gaming categories. Super Ghouls'n Ghosts has 2 likes from 3 user ratings. If you enjoy this game then also play games Super Mario Bros. and Super Mario 64. Arcade Spot brings you the best games without downloading and a fun gaming experience on your computers, mobile phones, and tablets. New arcade games and the most popular free online games are added every day to the site.