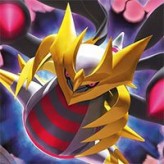 Start a brand new adventure as a 13 year old who aims to be the next Pokemon Master! Raise your Eevee well and take on the big shots in Pokemon Giratina Strikes Back! Face the evil Team Genesis and stop them from releasing and using a legendary Pokemon for their evil plans.

Pokemon Giratina Strikes Back is a fan-made Pokemon Ruby hack featuring a new intriguing story line. In this game, you start as a 13 year old boy/girlliving in a new region. One day, your father -who owns a large company called EDGE Co, called you into his office. There he asked you to follow his dream of becoming a Pokemon Champion and gave you an Eevee. Start your adventure with Eevee and meet many unique people along the way. Face Team Genesis and stop Giratina from rampaging and disrupting the world as you know it.