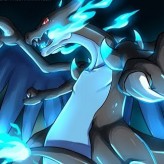 Pokemon Azotic Fire is a cool Pokemon hack replacing the original FireRed with new Pokemons, new sprites, and dozens of new changes. In this game, you play as a young trainer who had just returned after a long study journey abroad. When you returned, you found out that so many things were changed! Kanto is now ultra pretty with many different species of Pokemons living together. The game features new sprites for characters and overworld, access to primal forms and mega evolutions, a change in many routes, and so much more.

There have been 34 likes from 36 votes on this game.

Play Pokemon Azotic Fire game online in your browser free of charge on Arcade Spot. Pokemon Azotic Fire is a high quality game that works in all major modern web browsers. This online game is part of the Adventure, Strategy, GBA, and Pokemon gaming categories. Pokemon Azotic Fire has 34 likes from 36 user ratings. If you enjoy this game then also play games Pokemon Fire Red Version and Pokemon Emerald Version. Arcade Spot brings you the best games without downloading and a fun gaming experience on your computers, mobile phones, and tablets. New arcade games and the most popular free online games are added every day to the site.