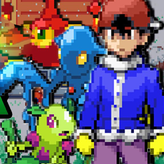 Pokemon Vega is one of the highest regarded of all foreign-language Pokemon hacks, and now you can play it in English!. Pokemon Vega was created by a group of Japanese programmers and contains a new region, all sorts of new Fake Pokemon and moves, and a significant challenge. The game is designed as a sequel to another Pokemon Fire Red hack called Pokemon Altair. The game features 181 new Pokemons and 56 Pokemons from new generations. The game also features 70 new moves and another 87 moves from the newer generation.

There have been 41 likes from 44 votes on this game.

Play Pokemon Vega game online in your browser free of charge on Arcade Spot. Pokemon Vega is a high quality game that works in all major modern web browsers. This online game is part of the Adventure, Strategy, GBA, and Pokemon gaming categories. Pokemon Vega has 41 likes from 44 user ratings. If you enjoy this game then also play games Pokemon Fire Red Version and Pokemon Emerald Version. Arcade Spot brings you the best games without downloading and a fun gaming experience on your computers, mobile phones, and tablets. New arcade games and the most popular free online games are added every day to the site.