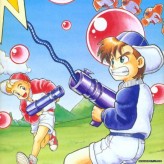 Burst bubbles in this classic shooter video game called Super Pang! Play with the two cool game modes for hours in this classic arcade game. Pop the bubbles the bounce around the screen and leave none intact! Will you be able to complete all the levels of the two game modes? Have fun!

Super Pang, also known as Super Buster Bros., is a classic arcade shooter video game released back in 1990 for the Super Nintendo Entertainment System (SNES). The game features two modes: Panic Mode where the player faces a rain of bubbles and the default weapon is the bubble shot and cannot be changed, the other mode is the Arcade Mode where each of the stages has a set layout, consisting of walls, destructible glass walls, invisible walls, ladders, and ice.

Play Super Pang game online in your browser free of charge on Arcade Spot. Super Pang is a high quality game that works in all major modern web browsers. This online game is part of the Arcade, Retro, Emulator, and SNES gaming categories. Super Pang has 2 likes from 2 user ratings. If you enjoy this game then also play games Super Mario Bros. and Super Mario 64. Arcade Spot brings you the best games without downloading and a fun gaming experience on your computers, mobile phones, and tablets. New arcade games and the most popular free online games are added every day to the site.