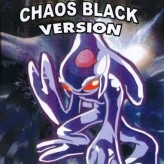 Head into the world of Pokemon and use your newly found Pokemon powers! Challenge and defeat the Professor’s grandson in Pokemon Chaos Black! Follow your sister’s steps, learn the legend of the PokeGods and explore new regions!

Pokemon Chaos Black is among the most popular Pokemon Hacks of all time. Based on Pokemon Fire Red Version, this game was so popular in the past that the owner created game cards and sold it online where thousands of people bought it and supported the game. The game features entirely new gameplay with updated sounds and graphics, as well as a new storyline. Will you be able to complete your new Pokedex and save the world while you're at it?

There have been 28 likes from 30 votes on this game.

Play Pokemon Chaos Black game online in your browser free of charge on Arcade Spot. Pokemon Chaos Black is a high quality game that works in all major modern web browsers. This online game is part of the Adventure, Strategy, GBA, and Pokemon gaming categories. Pokemon Chaos Black has 28 likes from 30 user ratings. If you enjoy this game then also play games Pokemon Fire Red Version and Pokemon Emerald Version. Arcade Spot brings you the best games without downloading and a fun gaming experience on your computers, mobile phones, and tablets. New arcade games and the most popular free online games are added every day to the site.