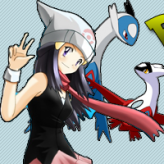 Decide your own destiny and try to do the right thing in this awesome Pokemon hack. Have a grood reputation and face Team Zen in Pokemon Black Orb! Discover the mysteries of the orb and capture powerful Pokemons!

Pokemon Black Orb is a 2009 Pokemon hack based on the version Pokemon Fire Red. Unlike other Pokemon hacks however, this one does not have GYM battles and Gym badges. Rather you’ll have to do a series of unique quests that affects the story. The game features many secrets and the story itself is not linear. Aside from the new plot, the game also features better and new graphics, new events, three new Fakemons that tie up with the story, and an innovative reputation system. Have fun!

Play Pokemon Black Orb game online in your browser free of charge on Arcade Spot. Pokemon Black Orb is a high quality game that works in all major modern web browsers. This online game is part of the Adventure, Strategy, Challenge, and Pokemon gaming categories. Pokemon Black Orb has 5 likes from 6 user ratings. If you enjoy this game then also play games Pokemon Fire Red Version and Pokemon Emerald Version. Arcade Spot brings you the best games without downloading and a fun gaming experience on your computers, mobile phones, and tablets. New arcade games and the most popular free online games are added every day to the site.