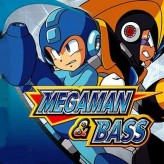 Join Mega Man and Bass as they fight for the entire human kind and fight face to face with a new villain Robot King in Mega Man & Bass! Choose between the two powerful heroes as they head out on an amazing adventure through various deadly worlds.

Mega Man & Bass (also known as Rockman and Forte in Japan) is an action adventure platformer game published back in 1998 and was ported to the Game Boy Advance hand held system back in 2002. The game is a spin-off to the original Megaman series in that the story is not concise or align with the series’ original plot. In this game, your goal is to stop the evil and twisted Robot King as he plans on destroying the entire race of man kind.

There have been 61 likes from 73 votes on this game.

Play Mega Man & Bass game online in your browser free of charge on Arcade Spot. Mega Man & Bass is a high quality game that works in all major modern web browsers. This online game is part of the Adventure, Arcade, Emulator, and GBA gaming categories. Mega Man & Bass has 61 likes from 73 user ratings. If you enjoy this game then also play games Pokemon Omega Ruby and Pokemon Mega Emerald X & Y. Arcade Spot brings you the best games without downloading and a fun gaming experience on your computers, mobile phones, and tablets. New arcade games and the most popular free online games are added every day to the site.