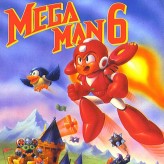 Play and enjoy the last Mega Man game for the Nintendo Entertainment System (NES) and destroy 8 new evil robot masters in Mega Man 6! Put a stop to Mr. X and face all of his new creation that hailed from all over the world.

Mega Man 6 is an action platformer video game released back in 1993 and is the last Mega Man game for the Nintendo Entertainment System (NES). The game continued the traditional Mega Man game but with new features, and an all new set of levels and bosses to destroy. The game also features a lot of secrets, hidden passage ways, and even fake bosses that will give you worthy reward. They say you’re not a real Mega Man fan if you haven’t played this! Have fun!

Play Mega Man 6 game online in your browser free of charge on Arcade Spot. Mega Man 6 is a high quality game that works in all major modern web browsers. This online game is part of the Arcade, Shooting, Emulator, and NES gaming categories. Mega Man 6 has 5 likes from 5 user ratings. If you enjoy this game then also play games Pokemon Mega and Pokemon Omega Ruby. Arcade Spot brings you the best games without downloading and a fun gaming experience on your computers, mobile phones, and tablets. New arcade games and the most popular free online games are added every day to the site.