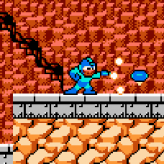 Let’s go back to the classic and play the old-school Mega Man! Shoot down six robot bosses and conquer their domain in this side scrolling action shooter game that spawned countless of sequels and spin-offs!

The original Mega Man was created back in 1987 for the Nintendo Entertainment System. Also known as Rockman in Japan, the game features a blue robot protagonist that could shoot energy balls in his hand. This protagonist has the ability to siphon the abilities of bosses he defeated so he can use it against other enemies. The game features advanced robot bosses to defeat: Cut Man, Elec Man, Ice Man, Fire Man, Bomb Man, and Guts Man. Destroy these robots to stop Dr. Willy and his evil plans. Complete the game and go back to your sister!

There have been 9 likes from 13 votes on this game.

Play Mega Man game online in your browser free of charge on Arcade Spot. Mega Man is a high quality game that works in all major modern web browsers. This online game is part of the Arcade, Shooting, Emulator, and NES gaming categories. Mega Man has 9 likes from 13 user ratings. If you enjoy this game then also play games Pokemon Mega and Pokemon Omega Ruby. Arcade Spot brings you the best games without downloading and a fun gaming experience on your computers, mobile phones, and tablets. New arcade games and the most popular free online games are added every day to the site.