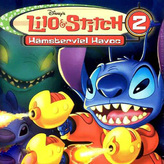 Join the cute duo Lilo and Stitch as they go on an amazing and dangerous journey through the world in Lilo & Stitch 2 – Hamsterviel Havoc! Collect bonuses, and blast away all enemy baddies in this action platformer game!

Lilo & Stitch 2 – Hamsterviel Havoc is a fun action shooter platformer game based on the Lilo and Stitch animation franchise. In this game, the spunky island girl Lilo, and her rambunctious alien “pet” Stitch is on a journey to stop Hamsterviel. Hamsterviel sets out to steal some of Jumba’s experiments to make it his own and wreck havoc to the tiny planet Earth. You must choose a hero among many characters and collect as many experiment balls as possible while beating every level.