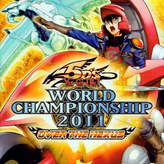 Are you an avid fan of the Yu-Gi-Oh anime series since 2007 and want to feel the thrill of being a card duelist? Well, you've come to the right place! Try out this cool and awesome card-dueling ROM - Yu-Gi-Oh! 5D's World Championship 2011!

Yu-Gi-Oh! 5D's World Championship 2011 is a card-dueling ROM released for the Nintendo DS (NDS) gaming platform in May 2011. The game pits you, a duelist against other duelists in challenging card battles on the widely-known duelist field. The game begins in the city of Crash Town which is deserted. You will play as Toru, who dreams of traveling to the famous New Domino city to duel in the World Championship. The game features over 4,200 playable cards consisting of Spells, Traps, and characters to help you compete and win duels! Select the best deck player! Good luck!