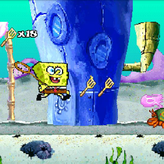 Help SpongeBob get his birthday present for Patrick in this fun game for the Game Boy Advance - SpongeBob SquarePants: SuperSponge. Finish all the tasks given by Patrick’s favorite superheroes to get the best present ever.

SpongeBob SquarePants: SuperSponge is a platform video game released for Game Boy Advance (GBA) on 2001 based on American cartoon series, SpongeBob SquarePants. In this game, you will take control of SpongeBob in his goal to give Patrick Starfish the best birthday present ever. To do that, you will need to get the autograph from Patrick’s favorite superheroes, Mermaid Man and Barnacle Boy. Get ready for a whole load of tasks and go on an adventure to defeat enemies and finish your ultimate goal. Good luck!