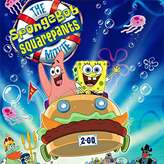 Help Spongebob prove himself to Mr. Krabs that he is true management material in this awesome adventure platformer game – The SpongeBob SquarePants Movie. Ride every twist and turn as you follow Spongebob and his best friend Patrick.

The SpongeBob SquarePants Movie is a 2004 Game Boy Advance (GBA) video game based on the animated film of the same name. In this game, King Neptune’s crown has been stolen, and Spongebob is due to be promoted! Unfortunately, all evidence of the theft points to Mr. Krabs! And now Spongebob’s promotion is at stake! Help Spongebob as he tries to help Mr. Krab from execution! Join the duo on a heroic, comedic quest!