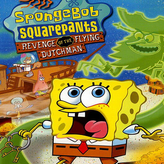 Take a stroll down to Bikini Bottom as you follow the adventures of our yellow square friend SpongeBob in SpongeBob SquarePants – Revenge of the Flying Dutchman! Embark on an amazing journey to uncover the truth!

SpongeBob SquarePants – Revenge of the Flying Dutchman is a fun platformer video game based on on the massively popular Nickelodeon cartoon show. In this game, Spongebob’s snail, Gary, ran away from home and stumbled on a mystical haunted treasure chest. Now Spongebob must go on a journey to find Gary and uncover the truth behind the ghost’s precious treasures. Play as Spongebob and other characters of the sea including Sandy Cheeks, Squidward, and Patrick Star! Complete all of the 11 exciting levels and have fun!