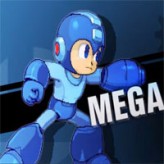 Stop the evil Dr. Willy and his four Robot Masters in this 7th installment of the main Megaman series. Blast away the other robots in Mega Man 7! Fight against Burst Man, Cloud Man, Junk Man, and Freeze Man in this retro arcade platformer game.

Mega Man 7 (also known as Rockman 7: Showdown of Destiny) is an action-platformer video game developed by Capcom for the Super Nintendo Entertainment System (SNES) and was released back in 1995. It is the seventh game in the original Mega Man series. The game was also first (and only) title to be featured on the 16-bit console. The game’s plot follows directly after the events of Mega Man 6. In this game, you will fight your way through eight new robots as you pursue the mad scientist. Beware of the mysterious robot Bass! No-one knows which side he’s on.

Play Mega Man 7 game online in your browser free of charge on Arcade Spot. Mega Man 7 is a high quality game that works in all major modern web browsers. This online game is part of the Adventure, Arcade, Emulator, and SNES gaming categories. Mega Man 7 has 114 likes from 126 user ratings. If you enjoy this game then also play games Pokemon Omega Ruby and Pokemon Mega Emerald X & Y. Arcade Spot brings you the best games without downloading and a fun gaming experience on your computers, mobile phones, and tablets. New arcade games and the most popular free online games are added every day to the site.