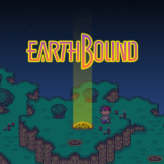 Help Ness and his three friends as they travel the world to collect melodies while defeating the alien Giygas and save the world in EarthBound! Prepare yourself for a fun and challenging RPG game with lots of funny dialogue, and awesome scenes.

EarthBound is a classic 1994 Japanese Role Playing Game (RPG) also known as Mother 2. In this game, you will start as a young boy named Ness on his mighty quest to save the planet from an invading alien force known as Giygas. The game is the second title of the Mother series but is the only one to be released in English and outside of Japan. This classic RPG game features many core elements of an RPG game and showcases awesome retro graphics that are even used and mimic by today.

There have been 18 likes from 18 votes on this game.

Play EarthBound game online in your browser free of charge on Arcade Spot. EarthBound is a high quality game that works in all major modern web browsers. This online game is part of the Adventure, Action, Emulator, and SNES gaming categories. EarthBound has 18 likes from 18 user ratings. If you enjoy this game then also play games Earthbound 2 and Super Mario World. Arcade Spot brings you the best games without downloading and a fun gaming experience on your computers, mobile phones, and tablets. New arcade games and the most popular free online games are added every day to the site.