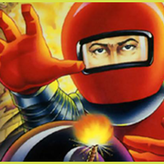 The daughter of the inventor has been kidnapped by the Black Bomber! Take the role of White Bomber and rescue the girl in this old-school action maze game – Bomberman! Defeat various villains and bring down the evil Black Bomber.

Bomberman is a classic 1990 video game that started the now popular series. Released for multiple gaming consoles including the Turbo Grafx-16, the game follows White Bomber as he tries to rescue the daughter of the one who invented him from the Black Bomber who imprisoned her in his giant castle. Will you be able to complete all levels and rescue the daughter? Place your bombs strategically and try not to get caught in your own blasts! Explore the origin of the franchise and have fun!

Play Bomberman game online in your browser free of charge on Arcade Spot. Bomberman is a high quality game that works in all major modern web browsers. This online game is part of the Arcade, Action, Emulator, and TurboGrafx-16/PC Engine gaming categories. Bomberman has 2 likes from 2 user ratings. If you enjoy this game then also play games Neo Bomberman and Super Bomberman 4. Arcade Spot brings you the best games without downloading and a fun gaming experience on your computers, mobile phones, and tablets. New arcade games and the most popular free online games are added every day to the site.