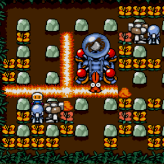 Destroy blocks, collect power ups and defeat all of your enemies in this classic arcade game. Navigate through maze like levels and defeat enemy bosses in Mega Bomberman! Use your wits and plan your move carefully as you plant your bombs and trap your opponents!

Mega Bomberman is a 1994 video game based on (or a port of) another title called Bomberman ’94 which is the third title of the series. In this game, the player must navigate several level of mazes and destroy various creatures and obstacles with bombs. Although Mega Bomberman is a port of Bomberman ’94, the game features different music tracks, and other noticeable yet minor changes. Control the white bomber and defeat the evil Bagular and his robot army!

Play Mega Bomberman game online in your browser free of charge on Arcade Spot. Mega Bomberman is a high quality game that works in all major modern web browsers. This online game is part of the Arcade, Strategy, Emulator, and SEGA gaming categories. Mega Bomberman has 10 likes from 12 user ratings. If you enjoy this game then also play games Pokemon Omega Ruby and Pokemon Mega Emerald X & Y. Arcade Spot brings you the best games without downloading and a fun gaming experience on your computers, mobile phones, and tablets. New arcade games and the most popular free online games are added every day to the site.