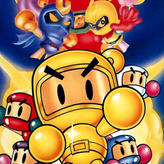 Five evil cyborgs, called the “Five Dastardly Bombers” are bent on taking over the universe! Play as the white bomber and save the planet in yourself Super Bomberman 2! Defeat Magnet Bomber, Golem Bomber, Pretty Bomber, Brain Bomber, and the leader Plasma Bomber in this classic SNES game!

Super Bomberman 2 follows the success of the classic action arcade game Super Bomberman, and is the second of the five Super Nintendo Entertainment System Bomberman titles. Released back in 1994, the game features your original gameplay with new area, new power ups, better graphics, and more performance. There are also a number of new bombs like remote control bombs! The Single Player game also features 5 new levels with a boss enemy at the end of each level.

Play Super Bomberman 2 game online in your browser free of charge on Arcade Spot. Super Bomberman 2 is a high quality game that works in all major modern web browsers. This online game is part of the Arcade, Strategy, Emulator, and SNES gaming categories. Super Bomberman 2 has 2 likes from 2 user ratings. If you enjoy this game then also play games Super Mario Bros. and Super Mario 64. Arcade Spot brings you the best games without downloading and a fun gaming experience on your computers, mobile phones, and tablets. New arcade games and the most popular free online games are added every day to the site.