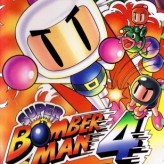 Travel across the prehistoric age and stop Bagular’s evil plot! Team up with other bomberman in this epic old school bombing game – Super Bomberman 4! Battle through time and ride dinosaurs! Stop the Great Bomber and foil Bagular’s plans!

Super Bomberman 4 is a classic strategy and action arcade game developed and released by Hudson Soft back in 1996. The story begins some time after Super Bomberman 3. Bagular escaped his prison nd summoned the four Bomber Kings and the Great Bomber to get revenge on white and black Bomberman. The game features two modes: Normal Game (singe player scenario) and Battle Game (skirmish). The latter mode unlocks all other bomberman characters and Bomber colors. Beware of the four Bomber Kings’ abilities.

Play Super Bomberman 4 game online in your browser free of charge on Arcade Spot. Super Bomberman 4 is a high quality game that works in all major modern web browsers. This online game is part of the Arcade, Strategy, Emulator, and SNES gaming categories. Super Bomberman 4 has 3 likes from 3 user ratings. If you enjoy this game then also play games Super Mario Bros. and Super Mario 64. Arcade Spot brings you the best games without downloading and a fun gaming experience on your computers, mobile phones, and tablets. New arcade games and the most popular free online games are added every day to the site.