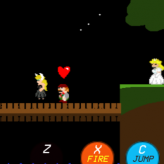 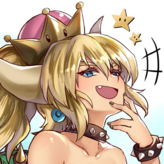 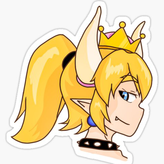 The plumber and all of his clones are trying to rescue the princess. Prevent them all from reaching the princess by using only three moves in this fun arcade game - Bowsette.

Bowsette is a retro-styled arcade game based on the Super Mario franchise and features the fan-made character, the titular Bowsette. In this game, you will take control of the fictional character monster named Bowser. Your goal is to prevent Mario and his clones from reaching Princess Peach by getting in his way. Bowser has three moves he can use: Transform, Fire, and Jump. Each action has its special effects and cooldown period. The Jump move has the fastest cooldown among the three skills. This skill will make Bowser jump and bump anyone that tries to jump over the bridge. The Fire move will make Bowser spit a fireball straight ahead - effectively defeating anyone that hits it. This skill has a moderate cooldown and can hit Mario from afar. Finally, the transformation skill that has the longest cooldown is also the most effective skill in preventing Mario from reaching the princess. This skill will turn Bowser into Bowsette, making Mario and all of his clones fall for her wonderful appearance. This skill will last several seconds and can effectively defeat multiple Mario clones simultaneously.

Play Bowsette game online in your browser free of charge on Arcade Spot. Bowsette is a high quality game that works in all major modern web browsers. This online game is part of the Arcade, Action, Unity, and Mario gaming categories. Bowsette has 1 likes from 1 user ratings. If you enjoy this game then also play games Strip Bowsette and Bowsette Club. Arcade Spot brings you the best games without downloading and a fun gaming experience on your computers, mobile phones, and tablets. New arcade games and the most popular free online games are added every day to the site.