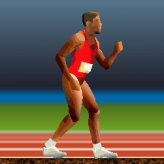 The hilarious running physics game is back, and this time you can enjoy it with a friend! Control each thigh separately in 2QWOP! Compete with a friend for twice the fun and figure out the proper way to run!

2QWOP is a hilarious running simulation game based on the very popular game QWOP. In this game, you must race against another player to a 100-meter track. In this game the controls are different and not the usual QWOP. Instead, the first player will control his character with QWER and the second player with UIOP. The game’s concept remains pretty the same but with a competitive element into it as you are no longer the sole representative for the Olympic games! Have fun!

Play 2QWOP game online in your browser free of charge on Arcade Spot. 2QWOP is a high quality game that works in all major modern web browsers. This online game is part of the Sports, Skill, Ragdoll, and Challenge gaming categories. 2QWOP has 1 likes from 1 user ratings. If you enjoy this game then also play games Five Nights at Freddy's 2 and Five Nights at Freddy's. Arcade Spot brings you the best games without downloading and a fun gaming experience on your computers, mobile phones, and tablets. New arcade games and the most popular free online games are added every day to the site.