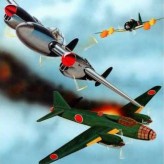 Experience the pacific theater back in World War II and try to reach Tokyo to destroy the entire Japanese Fleet in this shooter game 1942! Pilot the Super Ace and shoot down enemy planes while avoiding incoming fire in this old-school vertical shooter game.

1942 is a classic vertical shooting game released back in 1984 for the Game Boy Color (GBC) handheld system. The game is set in an exaggerated World War 2 universe and is the first game in the 19XX series. The game easily became one of Capcom’s very first hits followed by 1943: The Battle of Midway. In this game, you must pilot the American fighter plane called “Super Ace”, and your goal is to cross the pacific, reach Tokyo, and eliminate all of their fleets, as well as the boss plane Nakajima G8N.

Play 1942 game online in your browser free of charge on Arcade Spot. 1942 is a high quality game that works in all major modern web browsers. This online game is part of the Arcade, Shooting, Emulator, and GBC gaming categories. 1942 has 1 likes from 1 user ratings. If you enjoy this game then also play games Pokemon Yellow and Pokemon Crystal. Arcade Spot brings you the best games without downloading and a fun gaming experience on your computers, mobile phones, and tablets. New arcade games and the most popular free online games are added every day to the site.