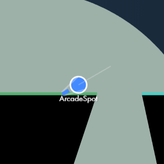 Bonk IO came back better than before! Use arrows to shoot down your enemies off the platform or to push them to the black spots in Bonk2 IO! Make your ball avatar heavy and push down all your enemies to be the last ball standing.

Bonk2 IO is the second installment and rewrite of the popular IO game called Bonk. This game features many improvements from the original game including improved game stability and performance, more levels, and added features. The game is still under development and is built using HTML5 technology, rather than Flash. The game has many planned changes including the ability for players to create their own levels, play with the levels created by other players, create a unique game mode with different rules, and many more. As of April 2020, this game is still in its BETA stages. The game can be played solo or online with friends from around the world.

Play Bonk2 IO game online in your browser free of charge on Arcade Spot. Bonk2 IO is a high quality game that works in all major modern web browsers. This online game is part of the Arcade and Multiplayer gaming categories. Bonk2 IO has 24 likes from 32 user ratings. If you enjoy this game then also play games Pokemon Fire Red Version and Super Mario Bros.. Arcade Spot brings you the best games without downloading and a fun gaming experience on your computers, mobile phones, and tablets. New arcade games and the most popular free online games are added every day to the site.