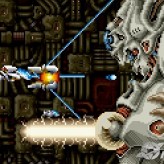 Super R-Type is a classic 1991 shooter game for the Super Nintendo Entertainment System (SNES). The game is a remake of R-Type II and features the same horizontal shoot’em up gameplay. The game is a mixture of the first two games of the series with some added levels and new enemies. Super R-Type is known in the classic arcade genre to have one of those games with high difficulty level that is emphasized with the lack of checkpoints.

Play Super R-Type game online in your browser free of charge on Arcade Spot. Super R-Type is a high quality game that works in all major modern web browsers. This online game is part of the Arcade, Shooting, Emulator, and SNES gaming categories. Super R-Type has 1 likes from 1 user ratings. If you enjoy this game then also play games Super Mario Bros. and Super Mario 64. Arcade Spot brings you the best games without downloading and a fun gaming experience on your computers, mobile phones, and tablets. New arcade games and the most popular free online games are added every day to the site.