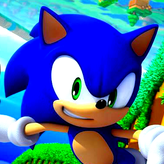 Re-invent the classic game with fully remade zones, new sprites, and a lot of other features. Complete the running challenge again in Sonic Chaos Quest! Collect golden rings and run through the tracks as fast as you can while collecting as many as you can!

Sonic Chaos Quest is a game hack / mod overhaul of the classic SEGA game Sonic the Hedgehog. The game features four fully remade zones: Paradise Coast, Border Fort, Dangerous Pit, and Robotropolis. These zones now features new music, graphics, chunks and with altered layout. The game can now be played as a different character. The available characters are: Sonic, Mighty, and Metal Sonic. Each character has their own sets of skills that only they can do.

Play Sonic Chaos Quest game online in your browser free of charge on Arcade Spot. Sonic Chaos Quest is a high quality game that works in all major modern web browsers. This online game is part of the Racing, Arcade, Emulator, and SEGA gaming categories. Sonic Chaos Quest has 5 likes from 5 user ratings. If you enjoy this game then also play games Sonic 3 Complete and Sonic Mania Edition. Arcade Spot brings you the best games without downloading and a fun gaming experience on your computers, mobile phones, and tablets. New arcade games and the most popular free online games are added every day to the site.