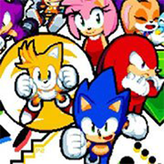 Discover the Chaos Island with Sonic and the rest of the gang in this fun hack of the original Sonic 1 game - Sonic Chaos Quest Ultimate! Defeat Dr. Eggman and spoil all of his plans once again!

Sonic Chaos Quest Ultimate is a mod/ ROM hack of the popular Sega Genesis game Sonic the Hedgehog 1. The game features three Sonic characters, you can play as the classic Sonic, a stronger version called Mighty Sonic, and the cool one Metal Sonic. Each character has its own special trait, ability, and skills. Sonic can do the usual things Sonic can do in the original game, Mighty Sonic can jump-dash and double jump, while Metal Sonic can only spin-dash, but does not need any air and can therefore breath underwater. The game focuses on the sunken Chaos shrine in the middle of the Chaos lake found in the island. Many parts of the game features underwater theme and many levels have underwater feature - making Metal Sonic a nice character for those who don't want the threat of drowning. Will you be able to stop Dr. Eggman and save the island dwellers on time? Good luck and have fun in this cool Sonic game.

There have been 28 likes from 36 votes on this game.