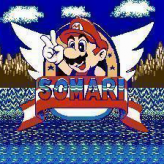 Have you ever imagined Super Mario playing inside the world of Sonic the Hedgehog? Make your imagination come to life as you leap from one platform, ramp, or island to another and collect rings to complete levels after levels in this classic arcade side-scrolling adventure platformer game - Somari!

Somari is a classic arcade side-scrolling adventure platformer game that was developed by the Hummer Team and was released in the year 1994 for the Nintendo Entertainment System (NES). This game is part of the unlicensed port of SEGA's widely-played classic, Sonic the Hedgehog. However, this game makes use of a Mario look-a-like as the main playable character, instead of Sonic the Hedgehog. The game features both gameplay of Super Mario and Sonic, where you go through levels, collect rings, beat enemies, and face hard bosses! Have fun out there!

There have been 46 likes from 59 votes on this game.

Play Somari game online in your browser free of charge on Arcade Spot. Somari is a high quality game that works in all major modern web browsers. This online game is part of the Adventure, Arcade, Emulator, and NES gaming categories. Somari has 46 likes from 59 user ratings. If you enjoy this game then also play games Somari the Adventurer and Super Mario Bros.. Arcade Spot brings you the best games without downloading and a fun gaming experience on your computers, mobile phones, and tablets. New arcade games and the most popular free online games are added every day to the site.