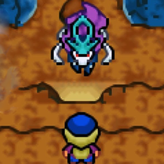 Explore a new Pokemon world and discover the power that sleeps inside Normal-element Pokemons in this fan-made Pokemon game overhaul – Pokemon Normal Version! Wander around Taejo and Seijo regions as you encounter Pokemons from different generations and try to capture the legendary Regigigas.

Pokemon Normal Version is a fan-made game overhaul with Pokemon Fire Red as its base game. In this game, you will explore Taejo and Seijo region and encounter hundreds of Pokemons across all the known generations as of today. However, the game didn’t say that you can capture all of them in this game. In this game, you will play as a 19 year-old boy and your starter Pokemon is Eevee. The game also features two rival gangs Frozen and Inferno that will play a big role in the story.

Play Pokemon Normal Version game online in your browser free of charge on Arcade Spot. Pokemon Normal Version is a high quality game that works in all major modern web browsers. This online game is part of the Adventure, Strategy, GBA, and Pokemon gaming categories. Pokemon Normal Version has 3 likes from 3 user ratings. If you enjoy this game then also play games Pokemon Fire Red Version and Pokemon Emerald Version. Arcade Spot brings you the best games without downloading and a fun gaming experience on your computers, mobile phones, and tablets. New arcade games and the most popular free online games are added every day to the site.