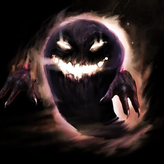 Prepare to be freaked out in this awesome yet creepy Pokemon ROM hack. Watch and see the ghost Pokemons messing with your game in Pokemon Creepy Black! Prepare to be spooked in this creepy game and have fun!

Pokemon Creepy Black is a very strange Pokemon hack based on the original Pokemon Fire Red Version. Unlike your everyday Pokemon hack, this one revolves around the creepypastas of Pokemon. The game hides itself as an original Pokemon Fire Red Version but has some weird instances that will freak you out. For example, upon starting the game you will see a ghost type Pokemon that will suddenly appear in your party. When using ghost Pokemons, there will only be one move: Curse. Using this move is very creepy as it literally kills the opponent Pokemon. Prepare to sense and feel the mysterious presence of darkness and death in this creepypasta game!

Be advised: this game is not suitable for very young players.

Play Pokemon Creepy Black game online in your browser free of charge on Arcade Spot. Pokemon Creepy Black is a high quality game that works in all major modern web browsers. This online game is part of the Adventure, Strategy, GBA, and Pokemon gaming categories. Pokemon Creepy Black has 5 likes from 6 user ratings. If you enjoy this game then also play games Pokemon Fire Red Version and Pokemon Emerald Version. Arcade Spot brings you the best games without downloading and a fun gaming experience on your computers, mobile phones, and tablets. New arcade games and the most popular free online games are added every day to the site.