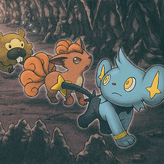 Join the exploration as you play as a human who turned into a Pokemon in this fun adventure game. Dive into the world of Pokemon in Pokemon Mystery Dungeon: Explorers of Time!

Pokemon Mystery Dungeon: Explorers of Time is a sequel to Pokémon Mystery Dungeon: Blue Rescue Team. Released back in 2007 exclusively for the Nintendo DS handheld gaming console, the game features the addition of Generation IV Pokémon. This Pokemon game version features a grand total of 491 Pokemon out of the 493. The game features the same gameplay as the previous Pokemon Rescue Titles: Blue Rescue Team and Red Rescue Team, with many new features centering around the touch functionality of the device. Will you be able to turn yourself back into a human? Good luck!

There have been 43 likes from 50 votes on this game.