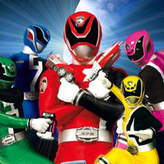 An evil warlord named Grumm is threatening to invade and destroy the planet Earth! Head out to hunt the warlord in Power Rangers S.P.D.! Fight your way through various levels and prove yourself worthy of the Power Rangers uniform!

Power Rangers S.P.D. (or Power Rangers Space Patrol Delta) is a side-scrolling beat’em up action game developed back in 2005 for the Game Boy Advance handheld system (GBA), that was based on the TV series of the same name. In this game, an evil space Warlord Grumm is wreaking havoc in the galaxy and threatening to invade and destroy the planet Earth. To prevent disorder and chaos, the Space Patrol Delta sent their best Power Rangers to stop the warlord.

Play Power Rangers S.P.D. game online in your browser free of charge on Arcade Spot. Power Rangers S.P.D. is a high quality game that works in all major modern web browsers. This online game is part of the Arcade, Action, Emulator, and GBA gaming categories. Power Rangers S.P.D. has 2 likes from 2 user ratings. If you enjoy this game then also play games Pokemon Mega Power and DBZ Ultimate Power 2. Arcade Spot brings you the best games without downloading and a fun gaming experience on your computers, mobile phones, and tablets. New arcade games and the most popular free online games are added every day to the site.